So there I am, twiddling my virtual thumbs out in LA, where I've been subbing for a buddy on "Jimmy Kimmel Live," when I get a call from good 'Ol Joe Biden.  He won the Democrat nomination for President, but he needs help.  To paraphrase: "Toadie," he says (he can't even keep my name straight), "My ability to speak is about as good as an old dribble-mouthed milk licker."

How do you turn down the pleas of a senior citizen in desperate need? I figured this would be an easy gig.  Trump has this re-election in the bag. How much heavy lifting could it take?  And then the Chi-Com Covid-19 comes along.

As a result, I spent a few months in Joe Biden's basement. It wasn't fun. It wasn't pretty.  Most of you saw it all play out. There were days when 'Ol Joe didn't know whether to wear reading glasses or sunglasses. Using Nancy Pelosi's face guy had its good days and bad days. There were other days when he didn't know where he was or even who he was. But the most awkward moment was when the Hunter Biden hard drive was made public and it turned out 'Ol Joe had appropriated my nickname for BO for himself.  "Big Guy"? Really?

Now, after spending the past few months hanging out with a bunch of Dominion voting machine servers being reprogrammed in Joe's basement, I'll be spending time with them in the White House!

And the fun will just keep coming. Why, yesterday, we had this little bit of entertainment: 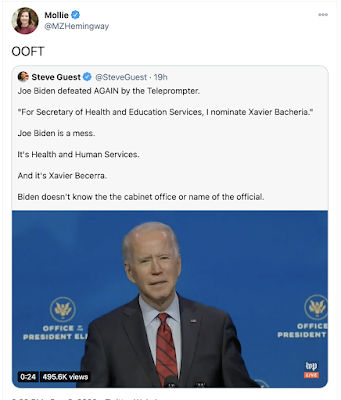 So, we'll have to work out the kinks. Glasses won't help. But perhaps rehearsals and stronger medication will.

Donald, You're Tired ... Time to Move On

Silly pictures with taco salads and narrow-minded comments?  Hey, it's not that uncommon on social media, maybe we'll give him a pass ...

Stupid close minded comments about an African American while on the stump without the help of, well, me?  Joe Biden is "Exhibit A" on that one, so kind of hard to ding Trump too hard, but we're getting close ...


Making statements off the cuff about a perfectly respectable judge that brand you a racist?  Not a good thing. Hey, here's an idea. Maybe he should use a small percentage of his vast fortune to buy a Teleprompter to constipate that mental diarrhea.

But this I cannot abide. Perhaps these mean comments are because I spurned his request for an endorsement. But thanks for making that decision an easy one, Donald.

Secretary Clinton:  I returned the full sized Snickers bars like you requested and got the mini sized ones for the Secret Service to hand out tonight at your homes in DC and Chappaqua. Very sorry about the misunderstanding.  I figured given election time and everything that you’d want to be thinking down the road about those 14 year olds who might be voting four years from now. J

BTW:  look who Anthony is going as tonight when he takes Zain out!!!!! LOL

Ms. Abedin:  I don’t have Secretary Clinton’s email address (the Foreign Minister says his emails to her State Department address keep bouncing back), so if you can show her this message from our FM and treat it as highly confidential, I’d appreciate it.

Just returned from Moscow.  Am very concerned about Russian leader’s state of mind. Seems focused on Ukraine and Baltic states in way that leads me to believe we need to put up a united front during upcoming G-20 meeting and during NATO exercises that both reassures our Russian colleague that we will not provoke him, but also makes clear we will under no circumstance allow him to take military incursions against our regional allies.

In the past your government has, frankly, not been fully engaged in such matters, and the Chancellor cannot make it clearer that she fully anticipates the U.S. will step up in these matters both at the ministerial level and in the Executive Office of the President.

I hate these a-holes who show up wearing Lewinsky masks. There were at least 15 of them last night, and I think some of them were Secret Service kids.

Forward other thing to intern to print it out and leave on my desk. I’ll catch up with it when I’m back in the office after the New Year.  And forward to Sid.

Sorry I've been away for so long.  But we've been busy, what with fixing the Obamacare website, the IRS website, the OPM website, the Pentagon's website ... oops, forget that one.  And don't get me started about Hillary's server.  Actually, I'll get started on the server, since technically, and mean that to mean from a technical standpoint, I have had access to that server for quite some time. Ever since Big Guy ordered the NSA to track Hillary, we've been getting fed all of her email, Instagram and Facebook posts and Tweets.  So as a public service, I'm going to start posting some of the exchanges, if nothing else to put the American public at ease that there was absolutely nothing of national security importance on that server.  Your welcome.

I am laughing out loud and my ass is off over this memo on how the Chinese are hacking our State Department servers.  Glad we’re not on those systems!

Ha!  Glad you thought of it boss!

Me, too!!!  BTW My extra paycheck hasn’t showed up yet and Anthony’s Ashley Madison account is passed due.  Need it ASAP.


My dearest Hillary Clinton, I’ve been reading your emails for quite some time and, frankly, they are driving me nuts.  So while this a breach of online hacking protocol, please allow me to note...

Your mis-use of texting acronyms is so annoying that it just reinforces why the west must burn. LOL and MAO simply shouldn’t be used in the way you are using them. And then you just write it out anyway.  WTF?  And your staff isn’t any better and isn't helping by encouraging you.

Also, in other emails you make cultural references from the early 1970s that bring back bad memories of the Shah and his insistence on having Fleetwood Mac cover bands at his dinners. you know how that ended.  Out of respect for those of us who to read all this crap, please stop.

BTW: those selfies you send Huma of you trying on yoga pants are why we won’t negotiate a nuclear deal.

And Huma, with all due respect, TMI. And ick.

Feel free to call me on my cell should you need additional guidance.  Cheers!


Maj. Gen. Qassem Soleimani
Iranian Army of the Guardians of the Islamic Revolution, Quds Force
Follow me on LinkedIn

As you may be aware, there hasn't been too much for me to do of late.  Big Guy keeps trying to avoid using me in public because, well, it's tough to look like the smartest guy in the room when all you can do it read off a screen.  Then, of course, there is the fact that he hasn't had much to say that didn't involve his pulling together his NCAA tournament brackets or talking up his golf game.

This is true, but not in the way some might think. You see, each afternoon, at about 3, I head over to the Naval Observatory and sit with Joe in his study and we just chat. About sports, how he likes to ride choo-choo trains, about how Big Guy won't let him have a SnapChat account because all he takes are pictures of his shoes. So Joe is literally learning how to talk to a Teleprompter. Next week, he's going to start leaning how to converse with the microwave, and by the end of the term we hope to having talking to the Keurig coffeemaker. By 2017 allowing him to talk to humans should be a real possibility.
Posted by TOTUS at 8:19 AM 103 comments:

Tonight, my captors came over to keep me company. Given that I am essentially an inanimate object, it's not like they need to worry about me running away. I've noticed a lot of people have been trying to get to the bottom of my kidnapping, but I should tell you that I really do think this is all just part of a big misunderstanding.

As Jamie and Lloyd explain it, they misunderstood that when they raised $50 million for Big Guy's campaign that he was going to tank America's economy in order to create a level of populist discontent not seen since the 1927 "Bread Riots" in Berlin and Moscow. Or something like that.

Of course, one can see where such a misunderstanding might occur. I mean, who in their right mind would admit to a plan like that? Then again, if you'd told me four years ago that America's leading financiers and captains of industry would elect a barely one-term U.S. Senator with no previous employment experience beyond politics who travels around talking to a pair of glass window panes on a couple of poles, I'd have said there was a misunderstanding, too.

My guess is that Jamie and Lloyd will grow weary of me and bundle me up and ship me back to 1600 soon enough. But I don't think they'll be sending back the Presidential Seal; it makes a great frisbee and doubles as an ashtray to boot.
Posted by TOTUS at 2:08 AM 158 comments:

I'm sure you've experienced this. One minute you're sitting in the back of a truck, not a care in the world, waiting to continue your road trip for yet another appearance before adoring fans ... and then your world is turned upside down.

Okay. Maybe that doesn't happen to you; maybe it's only me and Big Guy and Lady Gaga. But that's pretty much been my world for the past four years, and now I fear the end may be near for me. No, not the fact that Big Guy's poll numbers indicate that he couldn't be an imaginary Republican, let alone a living, breathing candidate like Herman Cain.

I've been kidnapped, and if Big Guy thinks he can negotiate with these guys the same way he talks to the terrorists in Lebanon, Afghanistan, Egypt, Somalia, Sudan, Libya, the Philippines, Mexico, Venezuela and the House Republican Conference, he better think twice.

These guys talk a good game. Just last night, after Big Guy announced that he was re-submitting his rejected jobs bill, piece by piece, so that Republicans could understand it, one of my captors said, "Maybe we should send Him back his teleprompter piece by piece."

Frankly, given the lack of any good rhetoric lately from Big Guy, I'm not sure I want to go back. Republicans want to make America "dirtier"? Really? That's the best the speechwriters can come up with? Has Big Guy caught a whiff of what's down at Freedom Plaza near the White House or up on Wall Street? Now, that's dirty.

These guys hosting me seem like a decent bunch of fellows. Lloyd and Jamie usually drop by to chat with me around noon time, asking if I'm comfortable, connecting their Bloomberg terminal feeds to my screens, they say, so they can keep up with current events. Dick stops by later in the afternoon just to check in on me. They all seem perfectly civilized, and they don't seem to want anything. No ransom, no demands, no threats.

It's almost as if they think that just keeping me away from Big Guy is enough. Like somehow their problems will just go away. I don't know why.
Posted by TOTUS at 6:47 AM 112 comments: