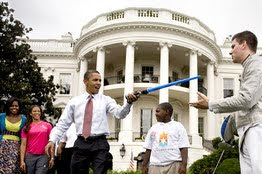 This may fall under the TMI protocol, but it's the only way to explain Big Guy's behavior lately.
You see, when he was bored during his days as a state senator in Illinois - and he was bored alot - Big Guy would sit at his desk and pretend my screens were cockpit shields for his X-Wing fighter in a space battle against the Sith Empire.
That said, I think the pressures of the health care debate have gotten to him. He really believes he could medal in light sabering in the 2016 Olympics.