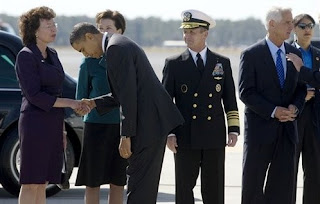 It's not like Big Guy isn't aware of the fiscal mess we are in. People have been noticing how he has been bowing when he meets even U.S. officials, like mayors or governors. But he's not bowing. That's just the way he walks so that he gets first dibs on dropped change.
Posted by TOTUS at 7:18 AM