It's Not East Wearing Green 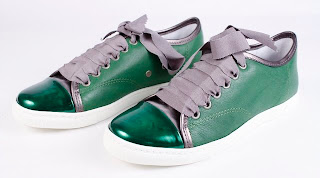 My guess is that these shoes will be getting a lot more attention in the coming days, since Michelle was wearing them over in Paris.  Lady M bought them in the United States for $585 in an effort to stimulate the economy.  Except she got them at cost.  Oh, well, at least they're green, so it will remind people of money, which is the point, I suppose.
Now, some people will complain that it's insenstive of her to wear $600 shoes in a time of economic challenge.  But consider this: she wore them in France, where, with the value of the Euro, they are a $750 shoe.  So she's actually wearing a bargain ... in U.S. dollars.
So if she's going to be criticized for anything, it should be her taste.
Posted by TOTUS at 6:23 AM