Who Gave Joe the Pen? 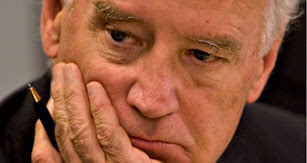 One of the things that attracted Big Guy to Joe Biden was the Delawarian's reputation for long-winded, tangled and almost incomprehensible writings, which is perhaps one reason why Joey B. tended to "borrow" so much from other writers.

But before leaving for this tour of Latin America, he wrote an op-ed that was handed out to reporters, and which was published in a number of different newspapers south of the border. We know he wrote it, because in this picture, which accompanied the editorial, he is holding his "editorial pen"

In the editorial, which was reprinted in English, Spanish and Portuguese, Joe intended to say that we must have intestinal fortitude to defend democracy. Unfortunately - and this is another way we know Joe wrote this - the sentence in Portuguese says, "Tenho a dor gastrointestinal," which translates to, "I have gastrointestinal pain." Given where he's traveling, that's to be expected, too, so I guess it all works out.
Posted by TOTUS at 7:00 AM