Shhh. Can You Keep a Secret? 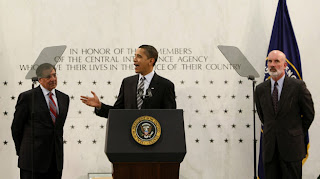 So Big Guy and I went out to Langley to talk to the troops at CIA headquarters.  This was a big to-do, especially since many of the senior field operatives from around the world flew in on the government's dime to hear Big O speak.  He only made two stumbling errors, but that had more to do with my operator's cold hands than anything else.
Big Guy's message to the attendees was stay the course, and he apologized for our administration's leaking of the "intense interrogation" memos. He blamed it on the court case, but that doesn't explain how the nonredacted versions ended up in the hands of all those bloggers we worked with during the campaign. Oh, well, that kind of stuff happens, I guess.

The bigger surprise for me, was that Big Guy put a hobbit in charge of the CIA.  I mean, geez, look at how short Panetta is, and he's a good eight feet back from Big Guy in that picture. I guess it's fitting that Panetta is there at Langley; after all, hobbits are supposedely imaginary and so are threats of "man-caused disasters."
Posted by TOTUS at 3:33 PM